"Voluntary catch & release is the single most important conservation contribution that individual salmon anglers can make to the protection of future salmon stocks".

Then...
According to a 2005 report1 by the Fisheries Research Services, ‘catch and release’ of Atlantic salmon is now a generally accepted practice in Scotland, and an increasing trend, and the current release level is a valuable contribution to the conservation of all stock components.

The report states that ‘it has been clear for a number of years that numbers of spring salmon (early running MSW fish) returning to Scottish waters have been in decline. In the early 1990s it was recognised that such declines posed problems both for fisheries and the underlying populations. Since this time, a growing number of management interests such as District Salmon Fishery Boards, Fisheries Trusts and proprietors have encouraged the practice of catch and release as a means of increasing the number of potential spawners and protecting the resource.’

‘Declines in the numbers of sea trout are also evident in some areas. This has resulted in catch and release also being prosecuted as a conservation measure in sea trout fisheries.’

...and Now
Since the 2005 report, the practice of Catch & Release had continued to increase in Scotland. The 2011 Salmon Fishery Statistics paper2 by the Scottish Government reports that 73% of the Scottish annual rod catch was returned, and within this total 91% of rod caught spring salmon were released.

Catches from net fisheries between 1950 and 1980 were typically in the range of 100,000 - 250,000 salmon & grilse; evidence that 'Marine survival of salmon has declined substantially over the period convered by the catch statistics'. Reductions in the netting industry has acted as a buffer for the rod fisheries as marine survival has declined.

The combined rod & net catch of Atlantic salmon in Scotland is now at a historially low level, demonstrating the decline in survival at sea. As the rod catch now represents over 80% of the total catch in Scotland, the benefits of anglers limiting their kill, and endorsing 'Catch & Release' as a practice, becomes even more important. 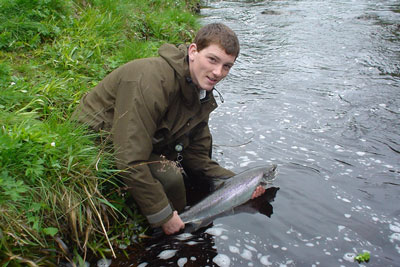 An Alness Springer Being Released

1. Use barbless hooks – pinch the barbs down of standard hooks with pliers.

2. Use small singles or doubles and avoid using trebles which can easily lodge in both the upper and lower jaws.

3. Ensure that your rod and leader are strong enough for the conditions and the expected size of fish so that you can subdue the fish quickly once hooked.

5. If possible, unhook the fish in the water. If that’s not possible use a knotless mesh landing net and return it to the water as soon as possible. Wet your hands first and support the fish underneath at all times. Never lift the fish out of the water by only holding it by the tail.

6. Never use gaffs or tailers, or beach fish.

7. Use pliers to remove the hook.

8. Keep the fish in the water, supporting it from underneath. Hold it carefully facing into the current until it is ready to swim off. It may kick and swim off on its own, or it may be a few minutes until it is ready. Try lowering the hand that is supporting it from underneath – if the fish starts to drop nose down, support it for another minute or two and try again.